What to Eat in Prague – Tips from a Local Expert

What to Eat in Prague and Where

Czech Republic is located in Central Europe at its very heart. It saw different forms of government and economic systems come and go including monarchy, democracy, capitalism and communism. All of them left a mark in Czech cuisine, which has, like a fluffy dumpling, soaked up influences from all over Europe. But there are rare dishes that cannot be found anywhere else. So the following list will uncover exactly that: 10 + 1 best restaurants in Prague, what to eat and a sprinkle of historical background on top.

Café Imperial and Next door by Imperial 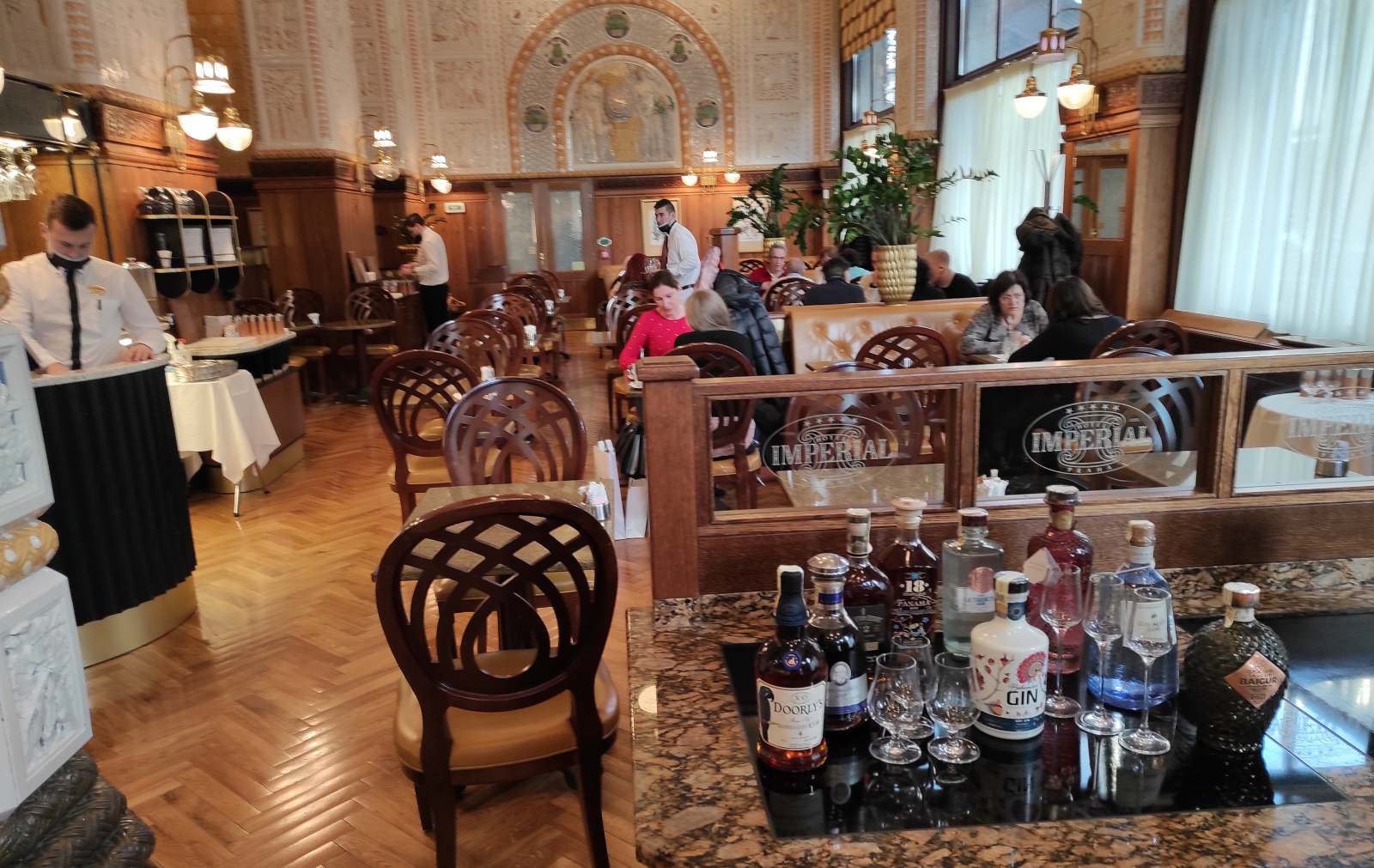 A good example of a unique meal would be so-called Kulajda or Svíčková that represent two important aspects of local food – love for soups and cream sauces. Kulajda is a wonderful soup made with dill, mushrooms and poached egg and Svíčková is a cream sauce served with boiled beef and dumplings. You can try both at Café Imperial, Prague restaurant owned by famous chef Zdeněk Pohlreich – Czech version of Gordon Ramsay. Even though prices are friendly, you will need to make a dinner reservation at least a week ahead to make sure you catch a table. Lunch time is not that busy and a good alternative is also Next Door by Imperial, a restaurant literally next door. 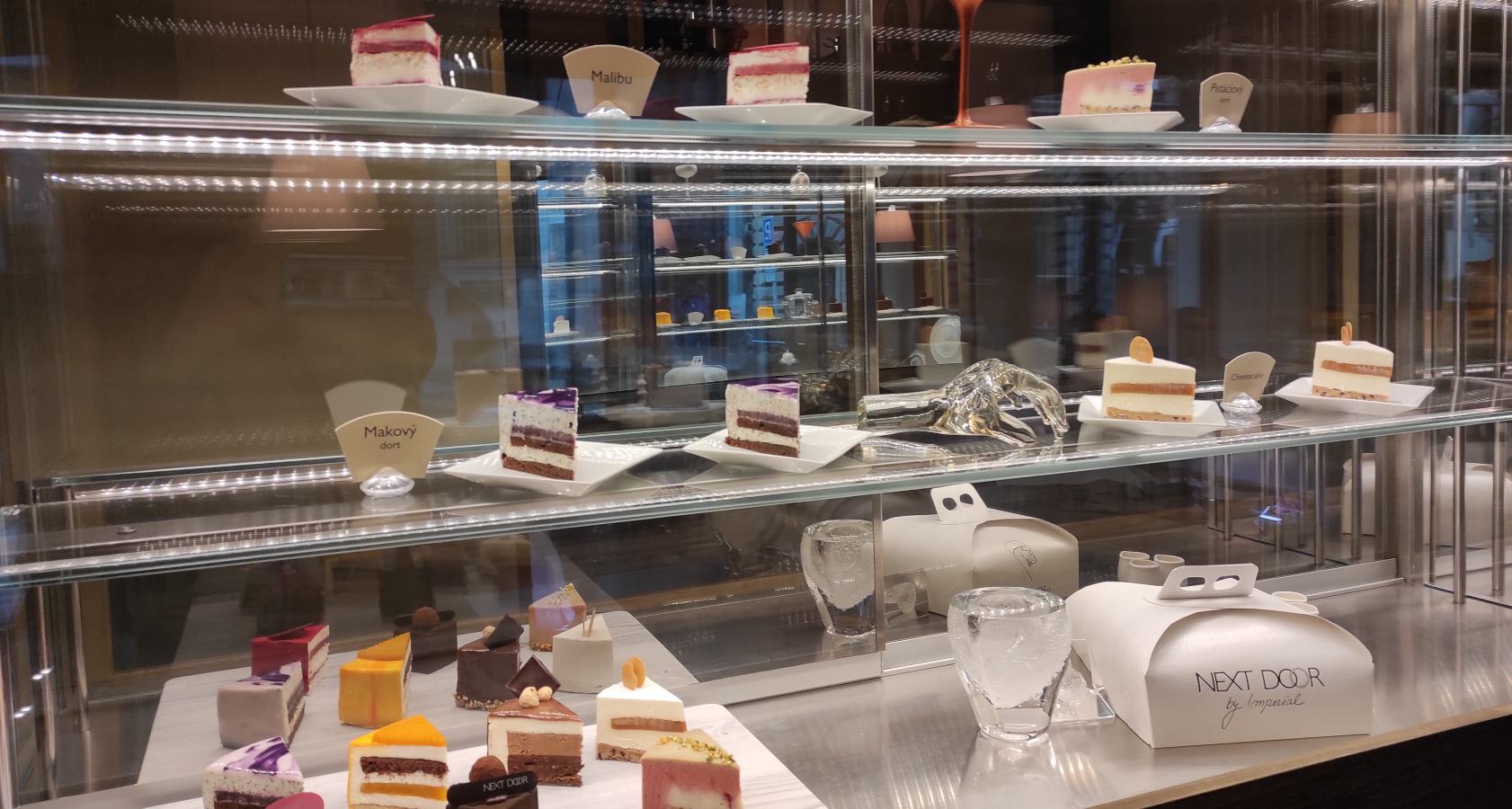 But before I lay out the rest of my list of Prague restaurants on the table for you, let’s take a very short dive into Czech past. Historically, a kind of plant that used to feed our ancestors the most was, surprise surprise, grain. Ancient meal “pražmo” that comes from the word “pražit” means “to roast”. It was simply a bunch of grains roasted on a hot stone, for example. Later on, mashes became very popular but as technology advanced, people started baking bread. It seems like an obvious meal, but a delicious bread is not a sure thing at all. Czechs are very proud of their bread, which was historically, often made of rye. 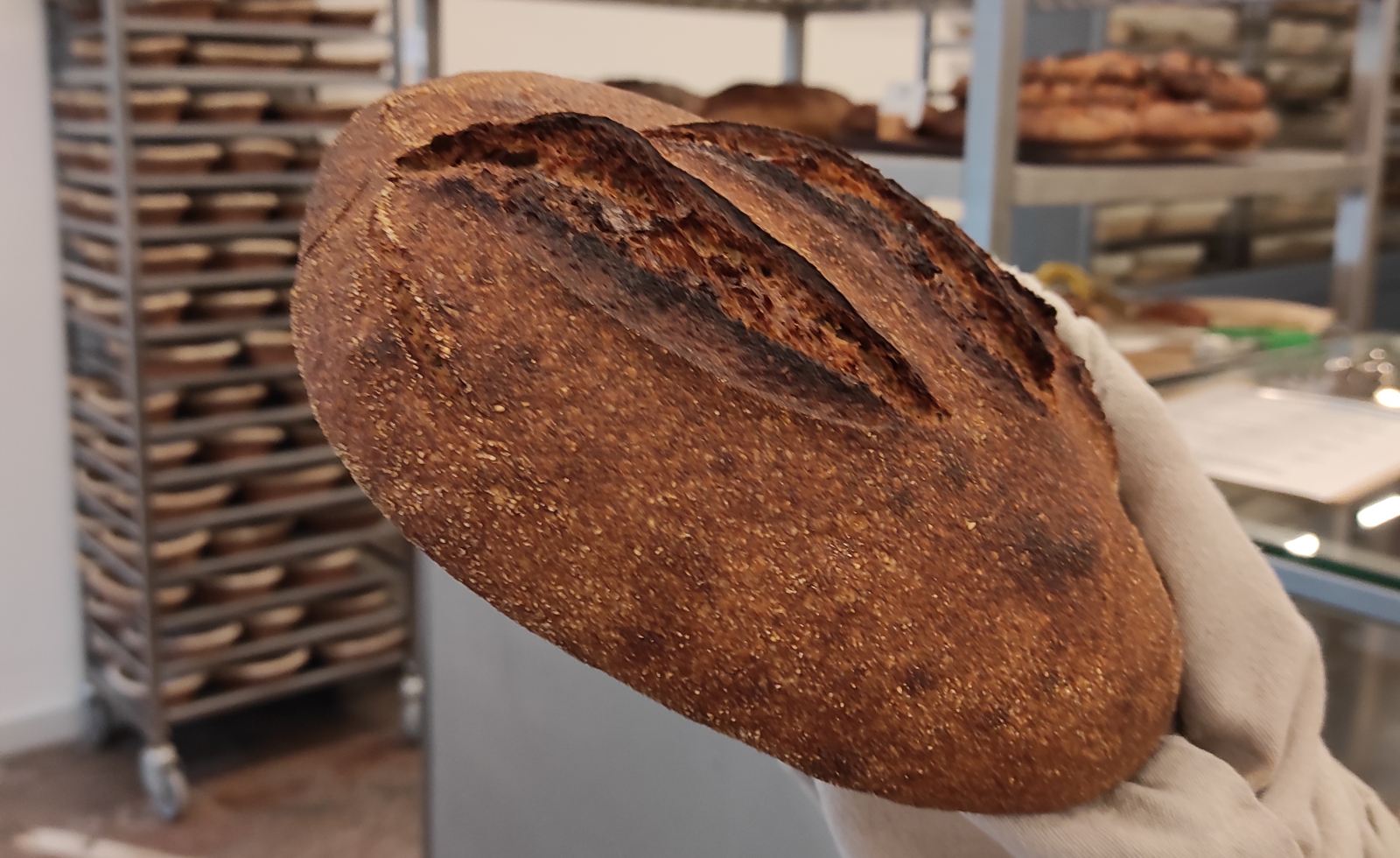 Speaking of grain, Praktika is a Prague bakery that makes it the “old way” and uses exclusively flour ground between two stones. The name hints it is not a fancy, but rather plain and “practical” place. Apart from delicious rye bread which you can easily eat on its own, Praktika is an awesome breakfast spot, serving fragrant coffee and scrumptious pastry. The bakery has three shops scattered around Prague in Letná, Karlín and Vinohrady district, making it more accessible in case you decide to visit the Czech capital. But let’s not stop at breakfast, next on the “what to eat in Prague” list are places ideal for lunch, dinner and more.

Times of monarchy are well reflected in dishes that aristocrats used to like. Their favourite pastime was game hunting, anything from wild boar to rabbits and birds. Luckily, there are still places where you can taste it. For example Red Stag restaurant near Republic Square in Prague. Their flagship is meat and a great aristocratic meal would be fallow deer from the forests of Count Sternberg. Furthermore as an appetizer you can try a selection of cheese from a high-quality local farm Krasolesí. But icing on the cake is that Red Stag is situated in the perfect foodie corner, only a few steps from Cukrář Skála, a café serving heavenly desserts. 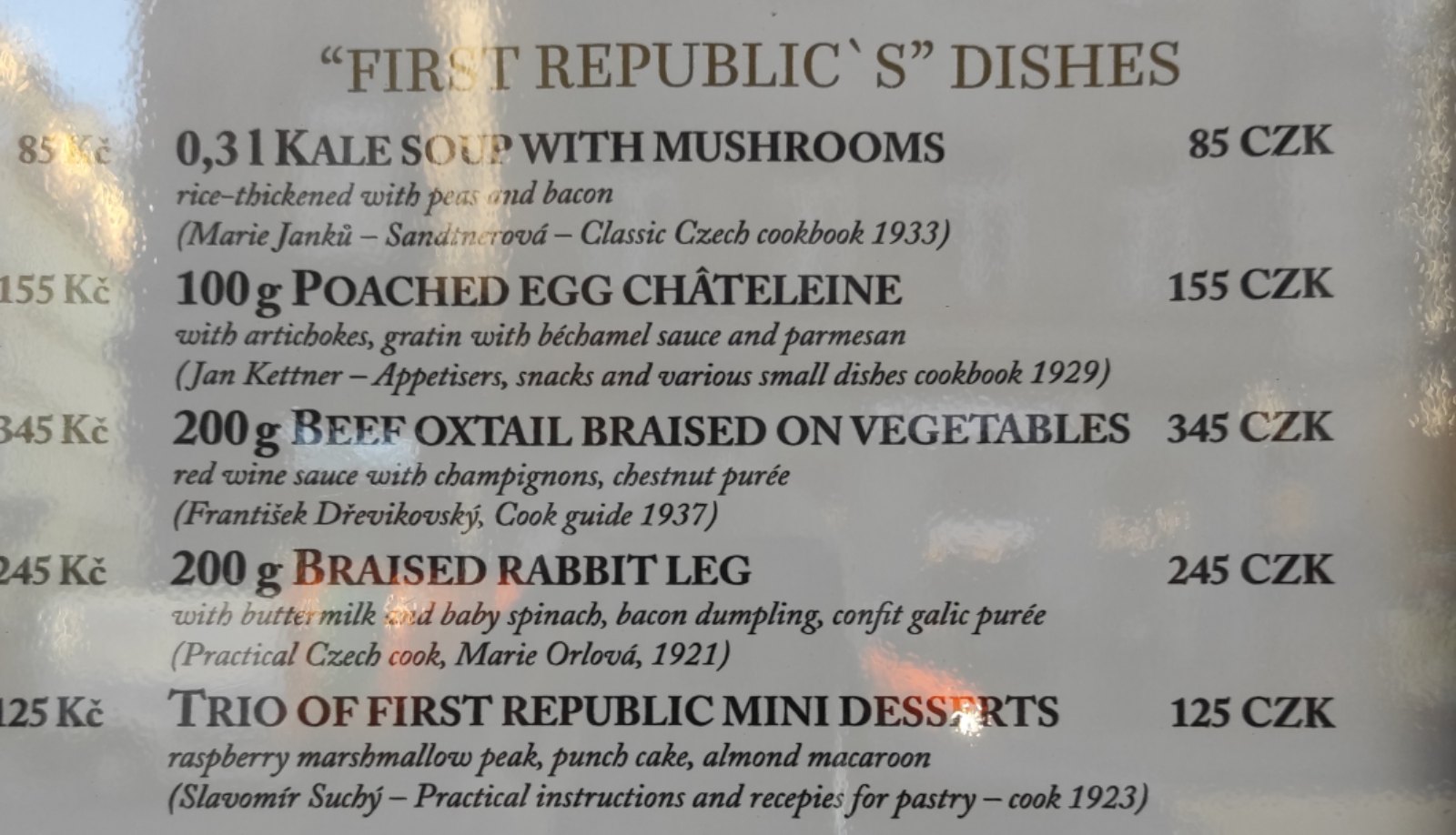 This list would not be complete without a place that revives recipes from time of the first Czechoslovak Republic. In the 19th century Czech people became anxious to get rid of monarchy and create their own state. A chance came up right after the World War I, so in 1918 Czechoslovakia was founded. Even though it had its own hardships, it was a time of considerable boom in culture as well as food. Restaurant Tiskárna makes recipes from this era dating back about a hundred years. Give a try to braised rabbit leg or beef oxtail slowly braised on vegetables.

Zlatý kříž and U Pinkasů Want to know about eating habits during communism? It was definitely not a time of big luxuries. After 1948 when communism started, people often found themselves standing up while eating at a canteen or a local delicatessen. One such a place is in Jungmannova street called Zlatý kříž (Golden Cross). They serve wide variety of chlebíčky – Czech open sandwiches. The one with roastbeef and caviar is delightful. So even though standing up is not luxurious, the above-mentioned chlebíček definitely is! By the way Golden Cross Delicatessen is round the corner from “U Pinkasů“ – the very first Pilsner restaurant in Prague. It opened shortly after Pilsner type beer was invented in our country in 1842. Nowadays the vibe is a little touristy, however thirsty locals still find their way there. 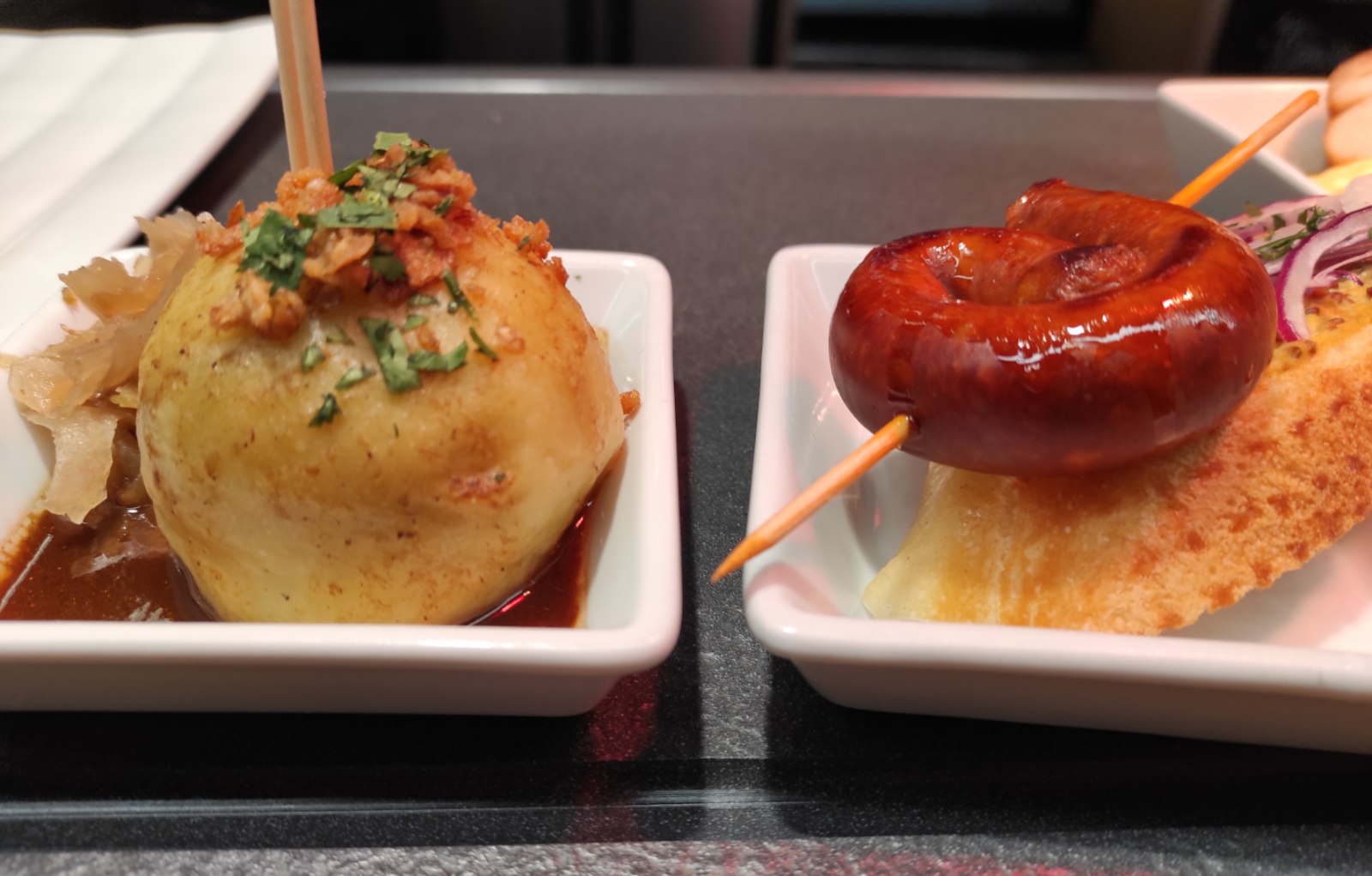 Since the Velvet Revolution that ended communism in 1989 in Wenceslas Square, Prague has given birth to a number of culinary hotspots pursuing innovation. A good example would be Špejle in Jidřišská street that serves Czech tapas – small portions of (not only) local food. Or Eska – a bakery and a restaurant located off the city centre in Karlín district. On the menu are excellent fusion and modern dishes that taste even better thanks to friendly and helpful staff. They are happy to describe ingredients to the uttermost detail as the offer changes quite often.  And finally, you can try one of the most innovative desserts on current foodie scene in Werichova vila, a house of a former Czech actor Jan Werich. Based on a local comic book story about solving a mystery, the name of dessert is “Hedgehog in a Cage“.

What to Eat in Prague – Conclusion

So there you have it. A list of foods and places that contribute to great local culinary reputation. As countless other cities around the world, Prague has wonderful and unique flavors worth exploring. All you need to do is a little research. In case you would like to intensify your experience by taking a food tour, take a look at our itinerary. We can provide first-hand overview of Czech culinary past & present while visiting great foodie spots. If you would like to know more about local beer or desserts, read on.

Charles IV and His Love of Wine

Czech Beer Worth Trying When You Visit Prague

The Story of Bohumil Hrabal and Golden Tiger